In January, the head of a group of serving and retired Russian military officers declared that invading Ukraine would be “pointless and extremely dangerous.” It would kill thousands, he said, make Russians and Ukrainians enemies for life, risk a war with NATO and threaten “the existence of Russia itself as a state.”

To many Russians, that seemed like a far-fetched scenario, since few imagined that an invasion of Ukraine was really possible. But two months later, as Russia’s advance stalls in Ukraine, the prophecy looms large. Reached by phone this week, the retired general who authored the declaration, Leonid Ivashov, said he stood by it, though he could not speak freely given Russia’s wartime censorship: “I do not disavow what I said.”

In Russia, the slow going and the heavy toll of President Vladimir V. Putin’s war on Ukraine are setting off questions about his military’s planning capability, his confidence in his top spies and loyal defense minister, and the quality of the intelligence that reaches him. It also shows the pitfalls of Mr. Putin’s top-down governance, in which officials and military officers have little leeway to make their own decisions and adapt to developments in real time.

The failures of Mr. Putin’s campaign are apparent in the striking number of senior military commanders believed to have been killed in the fighting. Ukraine says it has killed at least six Russian generals, while Russia acknowledges one of their deaths, along with that of the deputy commander of its Black Sea fleet. American officials say they cannot confirm the number of Russian troop deaths, but that Russia’s invasion plan appears to have been stymied by bad intelligence.

The lack of progress is so apparent that a blame game has begun among some Russian supporters of the war — even as Russian propaganda claims that the slog is a consequence of the military’s deva to avoid harming civilians. Igor Girkin, a former colonel in Russia’s F.S.B. intelligence agency and the former “defense minister” of Russian-backed separatists in eastern Ukraine, said in a görüntü interview posted online on Monday that Russia had made a “catastrophically incorrect assessment” of Ukraine’s forces. 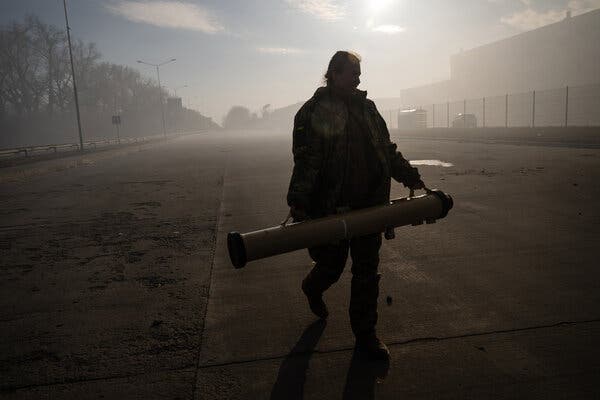 Lt. Tetiana Chornovol, the commander of an anti-tank missile unit operating on the outskirts of Kyiv, this month.Credit…Lynsey Addario for The New York Times

“The enemy was underestimated in every aspect,” Mr. Girkin said.

The Russian forces’ poor performance has also surprised analysts, who predicted at the start of the war that Russia’s massive, technologically advanced military would make short work of Ukraine. Mr. Putin himself seems to have counted on his troops quickly seizing major cities, including the capital, Kyiv, decapitating the government and installing a puppet regime under the Kremlin’s control.

“Take power into your own hands,” Mr. Putin urged Ukrainian soldiers on the second day of the invasion, apparently hoping Ukraine would go down without a fight.

Instead, Ukraine fought back. Nearly a month has passed, and Russian troops appear bogged down in the face of relentless attacks from a much weaker, though far more maneuverable, Ukrainian military.

“There was probably the hope that they wouldn’t resist so intensely,” Yevgeny Buzhinsky, ​​a retired lieutenant general and a regular Russian state television commentator, said of Ukraine’s forces. “They were expected to be more reasonable.”

As if responding to criticism, Mr. Putin has said repeatedly in his public comments about the war that it is going “according to plan.”

Pro-Russian troops driving a tank on the outskirts of separatist-controlled Donetsk this month.Credit…Alexander Ermochenko/Reuters

“We can definitively say that nothing is going to plan,” countered Pavel Luzin, a Russian military analyst. “It has been decades since the Soviet and Russian armies have seen such great losses in such a short period of time.”

Russia last announced its combat losses three weeks ago — 498 deaths as of March 2. American officials now say that a conservative estimate puts the Russian military death toll at 7,000. Russia says it lost a total of 11,000 service members in nearly a decade of fighting in Chechnya.

The failures in Ukraine have started to create fissures within Russian leadership, according to Andrei Soldatov, an author and expert on Russia’s military and security services. The top Russian intelligence official in charge of overseeing the recruitment of spies and diversionary operations in Ukraine has been put under house arrest along with his deputy, Mr. Soldatov said. Even Russia’s defense minister, Sergei K. Shoigu, who vacations with Mr. Putin and has been spoken of as a potential presidential successor, has suffered a loss of standing, according to Mr. Soldatov’s sources.

“It looks like everybody is on edge,” Mr. Soldatov said.

Mr. Soldatov’s claims could not be independently verified, and some independent experts have challenged them. But Mr. Shoigu has not been shown meeting with Mr. Putin in person since Feb. 27, when he and his top military commander, Gen. Valery Gerasimov, sat at the end of a long table as Mr. Putin, on the opposite end, ordered them to place Russia’s nuclear forces at a higher level of readiness.

“The war has shown that the army fights poorly,” Mr. Luzin, the Russian military analyst, said. “The defense minister is responsible for this.”

After Maj. Gen. Andrei Sukhovetsky, the deputy commander of the 41st Combined Arms Army, was killed four days into the war, the city of Novorossiysk, where he was previously based, issued a statement remembering him as “a faithful comrade, a valiant warrior, a wise commander and a selfless defender of the Fatherland.”

There was also Maj. Gen. Oleg Mityayev, among the Russian military’s most seasoned commanders. He had led Russia’s largest foreign military base in Tajikistan and was second in command of Russia’s forces in Syria. When Mr. Putin ordered his troops to invade Ukraine, General Mityayev was tapped to lead the storied 150th Motorized Rifle Division, whose soldiers helped take the Reichstag building in Berlin precipitating Nazi Germany’s defeat in 1945.

Russia’s shrinking force. The Pentagon said that Russia’s “combat power” in Ukraine has dipped below 90 percent of its original force. The assessment reflects the significant losses that Russian troops have suffered at the hands of Ukrainian soldiers.

On the ground. Amid Russia’s stalled invasion, Ukrainians continued to mount a spirited defense of Kyiv and said they had recaptured Makariv, a town about 40 miles away from the capital. In Kherson, videos and photographs showed Russian soldiers opening fire on protesters.

Cracking down on dissent. A Russian court sentenced the opposition leader Aleksei A. Navalny, already serving a two-and-a-half-year prison term for violating parole, to an additional nine years on fraud charges. Russia also amended a draconian censorship law to expand the scope of government bodies off-limits to criticism.

Biden’s diplomatic push. President Biden will travel to a NATO summit in Brussels this week, in his most direct effort yet to rally opposition to the invasion. He is expected to press allies for even more aggressive economic sanctions against Russia.

According to Kyiv, he lasted less than three weeks in Ukraine. After he was killed in battle, either Russian forces left his body behind, or it was captured by the far-right Azov Battalion, which posted a photo of the bloody corpse on Telegram with the caption, “Glory to Ukraine.”

Russian officials have not confirmed his death — or those of another four generals that Ukraine claims to have killed. But even accounting for the fog of war, experts say that Russia has suffered a damaging death toll among its military leaders on the ground in Ukraine, which could soon erode Russia’s military effectiveness.

The deaths reflect operational security failures as well as the challenges of the Russian military’s top-heavy command structure in the face of a much nimbler Ukrainian fighting force.

“In çağdaş warfare, you don’t have a lot of generals getting knocked off,” said Lt. Gen. Ben Hodges, the former commander of the U.S. Army in Europe. “But this is a very lethal battlefield.”

General Joseph L. Votel, the former commander of U.S. Central Command, said that the deaths could reflect Russia’s challenges on the ground — and reports that some Russian units did not understand the mission at hand and had even abandoned equipment. As a result, he said, military leaders appeared to be operating closer to the front to “supervise and keep their troops in the fight, by personal example or intimidation.”

“Continuing to lose senior leaders is not good,” he said in an email. “Eventually, loss of leadership affects morale, fighting prowess and effectiveness.”

For Russia’s generals, part of the sorun is that many of them have spent recent decades fighting a different type of war. In Chechnya at the beginning of the 2000s, Russia succeeded in pacifying a separatist uprising in a small territory by resorting to scorched-earth decimation of entire cities. More recently in Syria, Russia’s operations have been driven by airstrikes against a population that lacks sophisticated weapons or even a regular army.

A satellite image showing a Ukrainian strike against to Russian equipment at an airport in Kherson, Ukraine, last week.Credit…Planet Labs, via Associated Press

Ukraine, while far weaker militarily, has been learning from its eight-year war against Russian-backed separatist forces in the country’s east — a similar war, in miniature, to the one being fought now. Ukraine has its own air force, which remains largely intact, and çağdaş antiaircraft systems. As convoys of Russian armor have lumbered along Ukrainian highways, Ukrainian forces have deployed drones and highly maneuverable infantry units to devastating effect, leaving abandoned and burning vehicles.

Throughout Ukraine, Russian forces have now largely stalled. But analysts caution that the military setbacks will not deter Mr. Putin — who has cast the war at home as an existential one for Russia, and is increasingly signaling to the Russian public to prepare for a long fight.

The question is whether heavy losses and the pain of Western sanctions could force Mr. Putin to accept some kind of compromise to end the war — and whether President Volodymyr Zelensky of Ukraine would be prepared to offer concessions to satisfy him. On Tuesday, Dmitri S. Peskov, the Kremlin’s spokesman, played down any hopes of an imminent cease-fire, describing talks with Ukraine as going “much more slowly and less substantively than we would like.”

“The Russian leadership can’t lose,” said Andrei Kortunov, director general of the Russian International Affairs Council, a research organization close to the Russian government. “No matter what, they will need to end this whole story with some kind of victory.”