KYIV, Ukraine — A tall woman with blonde and pink hair and a small dachshund stood out among the crowd of police officers and volunteers at the checkpoint on the edge of Kyiv. She looked as if she were out for a stroll, but she had just survived a dangerous evacuation under mortar fire.

The woman, Sasha Myhova, 21, and her boyfriend, Stas Burykov, 19, were evacuated Friday from their home in Irpin, the northwestern suburb that has become one of the most fiercely contested areas in the three weeks of fighting since Russia’s invading troops advanced toward the capital and Ukrainian troops blocked their way.

“It was dangerous,” she said. “They were bombing as we drove.”

The heavy boom of artillery sounded again as she spoke. “Shells were landing right in our yard,” she said, pulling out a piece of metal shrapnel she had kept.

As the war in Ukraine settles into its fourth week, the suburbs on the edge of Kyiv have become important if unlikely front lines of the war, where the Russian and Ukrainian forces are stuck in a savage give-and-take at one of the gateways to the capital, in positions that have not really moved. 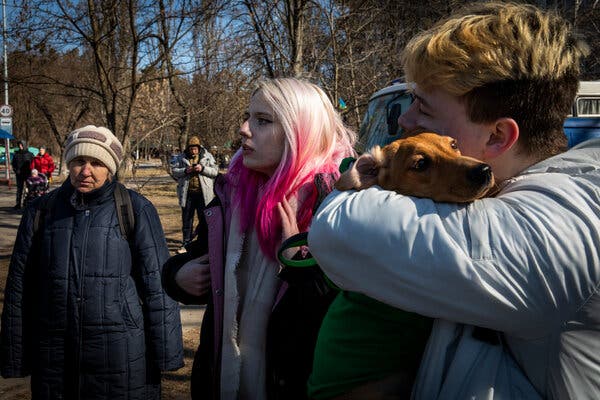 Sasha Myhova and Stas Burykov waited with their dog, Eva, at an aid station in Kyiv on Thursday after being evacuated from the besieged town of Irpin.Credit…Ivor Prickett for The New York Times

Blocked and badly mauled, Russian forces have nevertheless established positions around three sides of the capital. Ukrainian forces have successfully stalled them, and on Wednesday mounted a series of coordinated counterattacks to challenge those positions.

President Volodymyr Zelensky of Ukraine hailed the defense of Kyiv, led by the commander of land forces, Oleksandr Syrsky, saying that Ukrainian forces had regained control of 30 settlements around the city in the counterattack. “The enemy suffered significant losses and was driven away from the capital,” he said.

Yet the mortar fire and gunfire was so heavy in Irpin that the Ukrainians stopped attempting further evacuations after the one that included Ms. Myhova. The Ukrainian counterattack seems to have been met by a ferocious response from Russian forces. Residents and volunteers helping evacuate them said Russian artillery fire and even machine gun fire had intensified over the last few days.

A group of lightly wounded Ukrainian soldiers arriving at a hospital in Kyiv on Thursday after heavy clashes along the northern front around the capital.Credit…Ivor Prickett for The New York Times

One man, Vitaliy Kalman, was standing beside his suitcase hoping for a lull in the fighting. He said he had tried to go back into the district to retrieve some clothes from his apartment but came under mortar fire just beyond the ruined bridge that marks the entrance into Irpin. The bridge was destroyed by Ukrainian troops to forestall advancement by Russian troops in the first days of the war.

“They are very close,” he said of the Russians. “I saw the shell explode just near my house, and I ran back here with the evacuation team.”

A volunteer member of the Territorial Defense Forces described the street fighting in Irpin as an all-out guerrilla war. On the attacking side are the Russian troops, which Western military analysts say are likely seçkine airborne Special Forces units.

Defending against them are local volunteers, many of whom had just been handed rifles a few days before the Russians arrived in their town, alongside veteran militia fighters and uniformed troops.

Street fighting had been raging for days, according to soldiers interviewed on the edge of the town on Saturday. As of then, Russians controlled one of the three main thoroughfares, one was contested and the third was under tenuous Ukrainian control.

The locals have been slipping out at night and shooting at Russian positions, said the volunteer, who asked only to be identified by his nickname, Spotter, for security reasons. “It’s understood that they will be taking no prisoners,” he said of the firefights. “These are people who have weapons and know the local area perfectly.”

A doctor at a nearby hospital said it had received 25 wounded soldiers on Wednesday on the first day of the counterattack.

Ms. Myhova said Russian troops had twice entered her home in recent days. First, two soldiers who seemed to be scouts came into the yard, then three days ago, just before the Ukrainian counterattack, 10 Russian soldiers entered the house.

“They searched everything,” she said. “They said they had picked up a telephone signal from the house.”

Residents sifted through debris in a residential area of northwestern Kyiv, where a bombardment by Russian forces heavily damage several apartment blocks and a nearby school.Credit…Ivor Prickett for The New York Times

The soldiers warned the family that if they informed anyone about the location of the Russian troops, they would shoot them. “They pointed their guns at us,” she said. “They said, ‘We can shoot you because we know your location.’”

When Mr. Burykov’s 70-year-old grandfather, the owner of the house, began to remonstrate with them, the Russian soldiers told them that they were securing control over what was Russian land, citing the medieval kingdom of Kievan Rus, which Russia claims as its ancestral state.

“My grandfather tried to argue,” Mr. Burykov said. “He said, ‘It’s rubbish that it’s your land. I was born here. Go away.’”

On Wednesday, the day Ukraine mounted its counter-strikes, residents said the shelling worsened dramatically. There were four explosions around the house that shook the doors, and the sound of gunfire from assault rifles in the yard, Ms. Myhova said.

When they learned that volunteers were evacuating an elderly woman nearby, the couple, along with a sister of Mr. Buryakov, asked to get out. But Mr. Burykov’s parents, grandfather and other siblings stayed behind.

“They want to go when there is a green corridor,” Ms. Myhova said, referring to a humanitarian evacuation with guarantees of safety. “But there will not be any,” she said, “since even if one is agreed, they shoot at the cars.”

The Biden-Xi talk. In a two-hour call with China’s President Xi Jinping, President Biden discussed the Russian invasion of Ukraine, detailing the implications and consequences if Beijing were to provide material support to Russia in its attacks.

In the city of Mariupol. At least 130 people were rescued from a theater that was destroyed in the Ukrainian city. Up to 1,000 people were believed to be taking shelter in the building, and hundreds remain unaccounted for.

An attack in the west. A missile strike rattled the outskirts of Lviv, a western city that has been a haven for people fleeing areas under siege. The mayor of the city said several missiles had struck an aircraft repair plant at the airport in Lviv, destroying the buildings.

A looming energy crisis. The International Energy Agency said that the repercussions of Russia’s invasion of Ukraine are likely to intensify over the next several months, and nations around the world should respond by reducing their use of oil and gas.

Russian losses. British intelligence reports say that Russian forces have “made minimal progress on land, sea or air in recent days.” The Pentagon estimated that 7,000 Russian soldiers have been killed, more than the total of American troops killed over 20 years in Iraq and Afghanistan.

The Ukrainian army and volunteers evacuated about 150 residents from Irpin on Thursday, many of them pensioners who were struggling to survive after the fighting disrupted water, gas and electricity.

Evacuees from Irpin. Resistance in the suburb has provoked intense Russian shelling and gunfire.Credit…Ivor Prickett for The New York Times

“They are out of strength,” said a volunteer paramedic, Oleh Lutsenko, 32, who was on duty at the entrance to Irpin Thursday. He treated three wounded soldiers, one with severe wounds from artillery fire, among the evacuees, and his team also brought out the bodies of three dead civilians — all grandmothers, as he called them. “Maybe they died from hunger,” he said.

As his team pulled out just before 5 p.m., they came under machine gun fire, he said. Despite two days of counterattack, they were still in range of Russian guns.

While Ukrainian troops had success in stalling the Russian advance as it lumbered down the main highways toward Kyiv, Russian units have continued pushing south on the eastern and western flanks of the capital in an attempt to encircle it, military analysts have said.

The long columns of tanks that had backed up on highways to the north of Irpin have now fanned out into villages and forests outside of Kyiv, according to the volunteer, Spotter, who was interviewed at a gas station in a western district of the capital.

In his mid 50s, with a salt and pepper beard, he carried a walkie-talkie and said he ran an isim hoc intelligence unit, collecting information on the Russians’ positions in the suburbs and outlying villages.

“They are hiding tanks in villages between houses,” he said, adding that soldiers were also quartering in homes to avoid the cold.

A steady stream of civilians arrived in minivans and ambulances, some injured, at an aid station in north west Kyiv, having being evacuated from the besieged town of Irpin.Credit…Ivor Prickett for The New York Times

Their dispersal was complicating the Ukrainian counterattack, since the Russian armor was interspersed in villages, where civilians lived, even if most people have fled the area.

After two major ambushes on Russian positions outside Kyiv, in the suburban towns of Bucha and Brovary, which together left dozens of charred tanks on main roads, the armored vehicles are now avoiding traveling in columns, he said.

“They are now digging in,” Spotter said of Russian soldiers, as Ukraine’s artillery has been pounding them from the edge of Kyiv. “They didn’t expect this resistance.”

Volunteers guarding the checkpoint on the main western highway that heads out of Kyiv to the city of Zhytomyr said Russian troops had seized control of the road and vehicles could no longer safely use the highway except to a nearby settlement of Chaika.

It was unclear, Spotter said, how far south Russian troops had moved after crossing the Zhytomyr highway, though it appeared the intention of the Russian forces was to keep encircling the capital and eventually seal off access routes.

The advance was now stalled. “They are regrouping,” he said.